As many of my friends and family members prepared for the 2018 back-to-school season, I started thinking more about how much I struggled to stay organized as a child. Around the same time, I put out a giveaway on my personal Facebook page for two free hours of organization. When a local DJ who has worked with both of my siblings responded about his daughter’s room, I challenged myself to see how much I could get done with just two hours in the space.

In discussing this process, I will start by introducing myself as someone who suffers from some mild attentional deficits. Part of the implications of that include frequently struggling to properly estimate the amount of time it takes for me to finish an assignment, arrive anywhere, or you know… write a blog post. Because I know this about myself, I will generally double or triple the amount of time I expect it will take me to complete an organization project when I give a quote. Working backwards, I can generally expect that if I believe I can finish a room like this in two hours, I was very likely to be wrong. At any rate, I did what I could to prepare in advance (spoiler alert: we didn’t finish in two hours). So here I have included three simple but massively effective ways to help your little one stay organized throughout the schoolyear.

First, we planned a way to get the bed off the wall.

Having a child’s bed up against the wall is great for maximizing the amount of continuous floor space; however, it also creates a “toy trap” between the edge of the bed and the wall where your mini-me can stash things you’ve asked them to clean up. Want to avoid a future argument? Go ahead and move that bed!

In this case, the drawers under the bed were also non-functional as they had become blocked by toys and misaligned. So, moving the bed also allowed parents to clean up what was underneath. In the event that your child has a more platform-type bed, this arrangement will also make it easier to reach items that have fallen below or mysteriously made their way under the bed during cleanup efforts. 🙂

By the time we had the bed situated in its new perpendicular home, and all of the toys had been cleared out from the side and underneath, school was out for the day and we took a short break. I’ll digress for a moment to share an extra… This isn’t one of the main tips, but it’s just as necessary for adults as it is for children to take a break when working on a project.

Not only does it help in restoring your sanity after spending an hour clearing out shopkins and beads and whatever other artifacts you find in places they don’t belong; BUT… it also helps kids clear their less-able-to-persist-at-length heads so they can refocus later. To make sure I’m optimizing my break times (when working on my own; not with a client), I employ the pomodoro method. You can use the timer on your phone or download an app here (for android users), here (for apple users), or here (for chrome users). Any pomodoro timer will start with a basic set of three 25-minute focus sessions followed by two-minute breaks, then a fourth 25-minute session followed by a longer break up to 30 minutes in length. During two-minute breaks, I’ll run to the restroom or grab a cup of coffee and on longer breaks, I’ll stretch, walk around, or just scroll through instagram for a bit…. Moving on!

I’m a firm believer in children’s ability to declutter. You may have to talk to them about it in different ways depending on their age and they may need assistance (I’ll cover that in a future blog post)… but they can do it. Ultimately, however, I advise parents not to throw away their children’s belongings unless they are also willing to set aside money for the eventual therapy the child may need as a result… While that’s mostly a joke, I want to assure you that your child may be miniature, but that doesn’t mean they should have less of a say in what matters most to them or any less respect directed toward them or their belongings. Sure, what matters to them may change every three to six months, but that’s part of their growth, not a punishable offense. To put it shortly, it just means they’ll require decluttering and reminders to re-organize more often than an adult would. In my opinion anyway…

In one last digression, I wanted to share that this child was able to help in the decluttering process and reduced the number of books and items on her bookshelf. By. Her. Self. But I want you to notice a couple of other items in these photos.

Culprit no. 1 these tiny buckets on the bookshelf… We kept them for now to store a few favorite things, but they’re really small, even for storing small stuff. I don’t know about you, but I get annoyed trying to put things away in tiny little containers and end up not bother at all.

Culprit no 2., which I find in many rooms, is the ubiquitous rolling set of plastic drawers.

While some organizers advocate clear or transparent storage for kids so they can see what’s inside, I’m here to tell you that I have never (yet) met a child who doesn’t just pull everything out anyway.

So – between the rolling drawers, tiny buckets, and those plastic shoe boxes with lids (which are way too small and tedious for a child with a growing set of executive functioning skills) for all their tiny things, you’re just going to end up with a jumble of mismatched things, items dumped on the floor, a child who doesn’t want to clean up, and a parent who’s tired of arguing about it. Before you resort to throwing their things away… 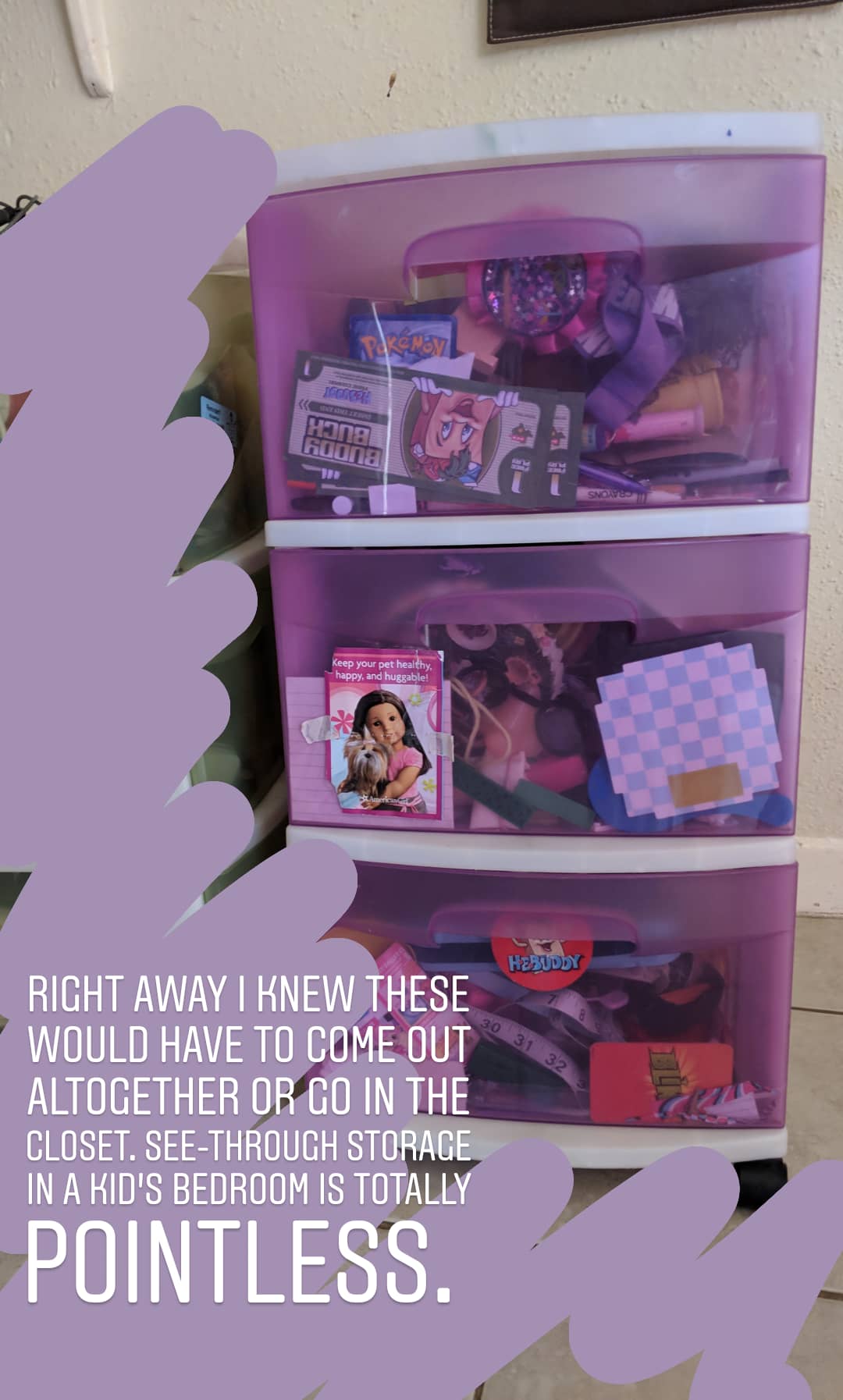 Lastly, we planned the space around how it will be used

This young lady wasn’t yet using her room for homework or studying, but one day she will be – and I would encourage you to keep in mind how your child’s room will evolve in order to stay organized for the coming year(s). In this regard, I coached mom and dad through the decision to keep barbie’s dream home for now and suggested that the same footprint in the room could one day be used for a small desk. For the time being, space was needed for playing with and storing toys as well as dressing for school and play so I instructed them on how to rearrange the closets for these needs so they could continue their journey after my two hours were up.

That was pretty much everything we accomplished in the one session but mom and dad kept working long after I left. Oh – and as a bonus because it wasn’t my idea and I had never seen one before: See that adorable pink bean bag next to this dresser/bookshelf combo? Would you believe me if I told you it’s actually full of/hiding all the non-favorite stuffed animals she just couldn’t part with?! Yesssss. You can also use them for storing extra blankets!

This is a photo of a similar product from Amazon. At this time, I am not an Amazon affiliate. As such I do not make any proceeds off your purchase of this item. But I think it’s amazing and that every kiddo should have one.

Just for fun, here’s an example of the toy storage I would suggest ❤

This image was taken directly from the At Home website. I couldn’t tell you whether this exact one is available in stores but I really do think these are a fantastic way for kids to store their belongings; big and small. Easy to fill, easy to drag around, easy to dump out. And they’re only like $20 USD.

Let me know if you’d like to see a few more tips on this subject or details about the shopping list I provided for this family to keep their daughter organized for the coming school year. Also, if you’re interested in what I could do in your child’s room with just two hours, feel free to send me a DM on instagram or schedule your in-person appointment now. Just note that the giveaway is now closed so fees will apply; however, given enough interest, I may reopen the giveaway after the winter holidays or in future years.

Before I sign off – I also wanted to introduce you to the lucky winner of the giveaway:

DJ MIK ONE began Djing in 1995 at the age of only 13 years old. He set his career in motion by doing nearly every house party in his local neighborhood with a mixer his mom purchased at radio shack and a set of belt-driven turntables he acquired from a pawn shop. He quickly grew to love the feeling of making people dance. He now DJs for a variety of events such as the acclaimed live graffiti art festival, Clogged Caps, a number of Scion enthusiast events, corporate events for Fortune 500 companies, and a number of car shows (including All Team Bash; which is hosted by my brother and his fam!!). DJ MIK ONE even worked my sister’s wedding in 2017, has been nominated for multiple awards, and currently lives in Houston with his wife and daughter aka DJ MIK TWO, whose room is featured in this post.